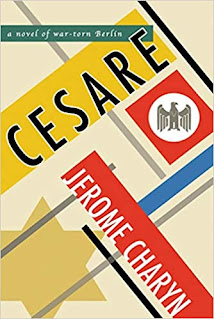 Madmen. Open up Jerome Charyn’s novel titled, Cesare, and be prepared to be caught up in life and death decisions in Berlin during the Second World War. A young naval cadet named Erik unwittingly saves the life of Admiral William Canaris, the head of German Military Intelligence. Set amid the horror of Nazi atrocities, the novel riffs on The Cabinet of Dr. Caligari, making Erik the character of Cesare, and Canaris the mad doctor. Readers join in a nightmare situation where madness rules as they try to hide and protect Jews from the death camps. Erik’s loyalty to Canaris drives much of the action. Madness increases when the setting changes to Theresienstadt. Historical fiction can take us to places and times that can be perceived as better or worse than our current ones. While this novel is one that takes us to a much worse time and painful places, Charyn’s fine prose and imagery pull us along until we have had enough and must escape the madness and return to the relative sanity of our homes.

Posted by Steve Hopkins at 1:56 PM